Animals used in the fur farm industry are subjected to unimaginable cruelty and eventually slaughtered in the name of ‘fashion’. These cruel products have no place in Australia, and Victoria could lead the way and become the first state in Australia to legislate a ban on the sale of all new fur products.

Current law in Australia and Victoria

The fur industry has a long and contentious history, primarily on animal welfare grounds. Importing dog and cat fur into Australia is prohibited.

The RSPCA does not support fur farming and has a policy objecting to fur and skin production from animals farmed for fur and is a member of the International alliance of animal welfare organisations that oppose fur, The Fur Alliance.

The major fur farming regions are USA, China, Russia and the European Union. Most fur enterprises acquire animals using traps, or have fur farms where animals are specifically bred and killed for their fur. Traps are non-selective, injuring and killing many non-target animals including endangered species and domestic companion animals.

In fur farms, animals are kept in horrendous conditions, are highly confined, and spend their lives in cages where they are unable to perform any natural behaviours. China has the largest fur industry in the world, enabled and supported by cheap labour, appalling animal welfare conditions and poor laws and regulations.

Animals killed for fur in China include foxes, rabbits, racoons, racoon dogs and domestic cats and dogs. Workers take animals from the streets, even those who are wearing collars indicating they have a human home.

After weeks of confinement animals are anally and orally electrocuted, hung upside down, severely beaten and eventually have their throats cut. Animals killed for their fur are often skinned alive before being thrown onto piles of other dead and dying animals. Skinless animals have been seen blinking slowly, making purposely body movements and gasping for up to ten minutes after having their fur removed.

Positive changes happening around the world

New York State and New York City are both considering bills to ban the sale of fur. Europe has restrictions in place regarding fur. Norway has recently legislated a stop on fur production, with a transitional period allowing workers to find other employment. Brazil, India and New Zealand are considering the same.

The moral case has influenced the fashion industry with international designers and retailers deciding to no longer use or sell fur. The Prada Group announced their commitment to innovation and creativity whilst meeting the growing demand for ethical products. London Fashion Week in 2018 was the first global fashion event to ban animal fur. Even the Queen has recently committed to stop wearing all new fur following animal welfare concerns.

The Animal Justice Party and Four Paws Australia recently carried out a joint investigation and discovered that real fur products are being sold as fake at markets across Melbourne.

The investigation discovered that real fur items are being sold as fake at South Melbourne Market and Queen Victoria Market. Other items labelled as rabbit fur were tested by a laboratory and confirmed to be raccoon and raccoon dog.

Raccoon dogs are in the same family as the domestic dogs we share our homes with, yet they are subjected to unimaginable cruelty on fur farms and then brutally slaughtered in the name of ‘fashion’.

Andy Meddick will be calling on the government to implement a fur taskforce and move to ban the sale of fur in Victoria. These cruel products have no place in our state. 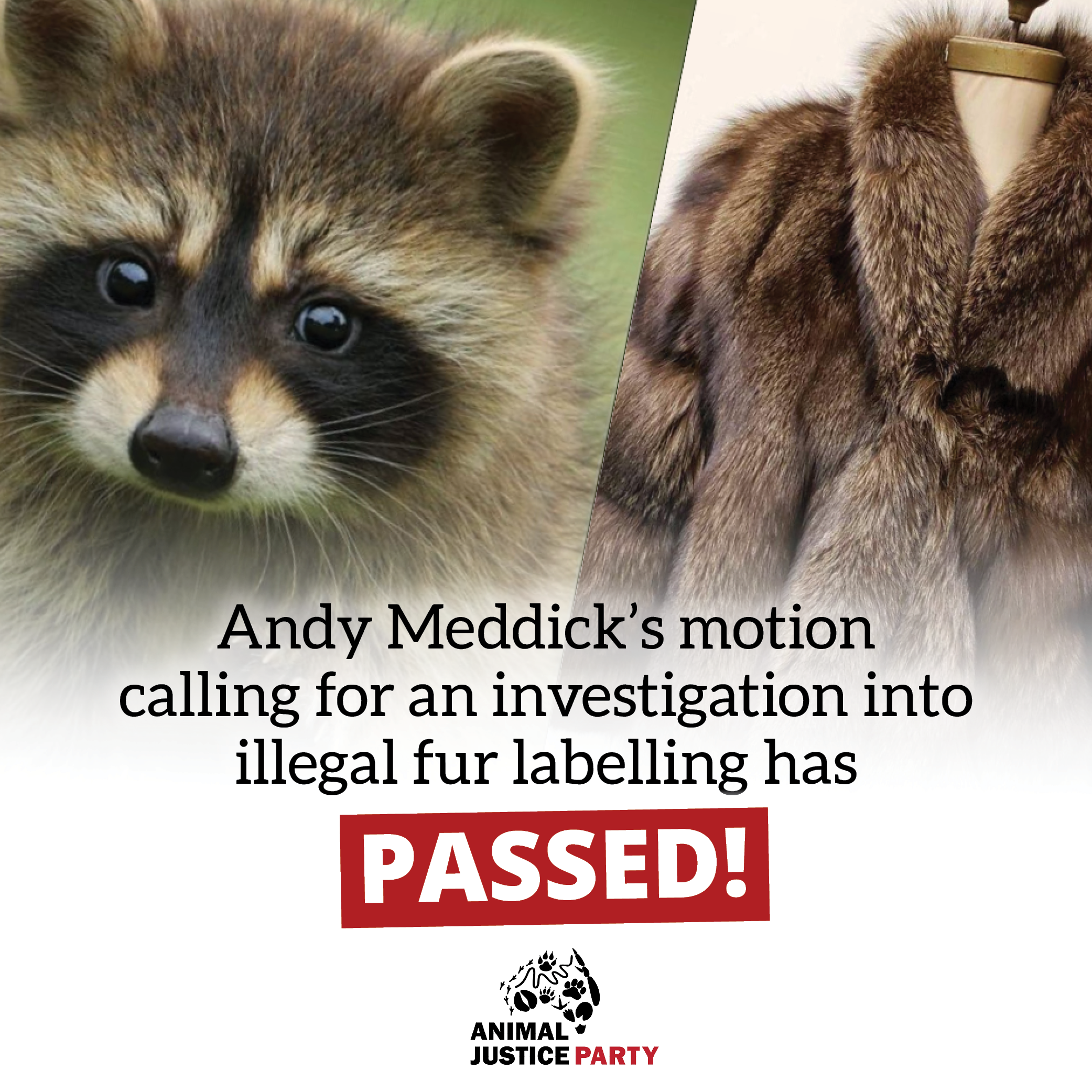 Our motion calling for a fur taskforce and an investigation into illegal fur labelling has passed!

Today our incredible MP Andy Meddick won his debate in parliament calling for the establishment of a fur taskforce and an urgent investigation into the illegal labelling of fur products.

This is huge news, particularly as it was supported by the government who have committed to working with us to end fur cruelty, starting with investigating just how widespread illegal fur labelling is.

We’ll keep you updated as the investigation progresses.

What you can do to help

Call and write to your MP and The Premier who can put a stop to this cruelty. Let them know your support for a complete ban on this cruel trade.

Join our mailing-list to be kept up to date with the campaign.